Made to Last – The New Fashion? 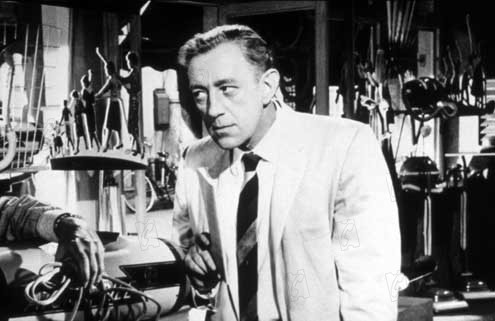 In the 1950’s Ealing Comedy, The Man in the White Suit, Sydney Stratton – a chemist played by Alec Guinness – invents a fabric that doesn’t wear out and never gets dirty. Textile manufacturers are horrified when they realise that such indestructible clothing will eventually undermine their business model. But what if this were to happen for real? It’s not hard to imagine the panic in many fashion industry boardrooms if such a fibre could be developed, or even if it was just suggested that clothing should be made to last longer. Yet the fashion industry is under growing pressure to do just that – to make its products more durable, to rely less on cheap and disposable materials, and to take more responsibility for its social and environmental impacts.

On one estimate from the United Nations Environment Programme (UNEP) it takes 3781 litres of water to produce just one pair of jeans, and 20% of the world’s industrial waste water comes from the dyeing and treatment of fabric. The same pair of jeans accounts for as much carbon dioxide equivalent (CO2e) as would be produced by driving 111 kilometres. Added together the climate impact of fashion is greater than international aviation and shipping put together. While we are often told to fly less to reduce our personal climate impact, the effects of our clothing choices are perhaps less well understood.

Manufacturers, retailers, and consumers need to work together to move fashion away from a model of take-make-waste. That will require innovation and entirely new ways of thinking, which is why the sector is a focus for a climate-focused Design Sprint Camp to be held later this autumn.

“In fashion, as in every sector, the secret sauce for sustainable transformation is new collaboration. The businesses that succeed will be the ones with the culture and skills to traverse the old artificial boundaries that limit progress,” says David Kester, founder and managing director of the Design Thinkers Academy, London which will run the initiative.

“The notion of re-inventing the take-make-waste society sounds daunting and the path to inaction. That’s why, on the Design Sprint Camp, we will laser in on fast fashion as a topic area. We have already conducted extensive ethnographic research with consumers on the subject which will be shared with participants. With this as a practical starting point, alongside a safe space to experiment and different collaborators and tools, we will learn by doing, looking to create new ideas, solutions and lessons that people can then take away to apply in all our businesses and sectors.” 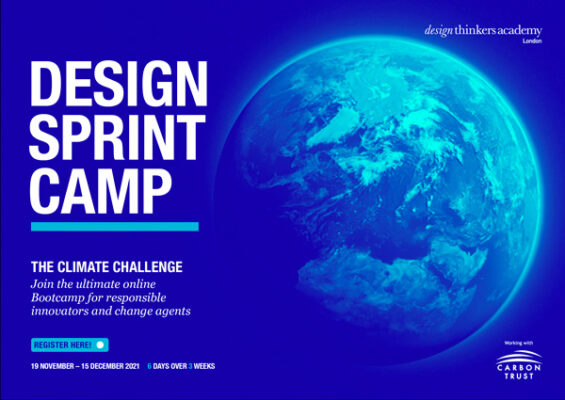 The Sprint Camp is being developed in partnership with the Carbon Trust, an international climate change and sustainability consultancy. Pauline Op de Beeck, fashion sector lead for the Carbon Trust, says that until quite recently the companies that were looking at more sustainable ways of manufacturing and material choice were those wanting to establish themselves as pioneers. “They were definitely the companies that see themselves as sustainability leaders and they wanted to be among the first who did this,” she says. Now though, many of the most recognisable and established fashion brands are moving in the same direction, signing up to sector initiatives such as the G7 Fashion Pact, which recognises that only collective action can bring about meaningful change. The challenge then is to turn commitments into action, says Op de Beeck. “There is always a gap between signing up to something and then realising what you have to do to make good on those commitments and then starting to develop those strategies.”

Another initiative, focused on the UK, is Textiles 2030, managed by WRAP, a charity working with industry, citizens and government. Previous collaborations in the sector have already reduced water use, emissions and waste but there is still a long way to go. “Still an astonishing amount of clothing goes into landfill,” says Julie Hill, who chairs WRAP. It amounts to around £140 million of used clothes a year in the UK. WRAP has a long track record of bringing stakeholders together to tackle waste, for example plastics and packaging. But fashion, along with consumer electronics, another priority sector, pose additional challenges.

Supply chains, waste streams and durability are technical challenges. But the physical nature of clothing and how it is made is only one side of the coin. The other is psychological. “It’s not always just about the longevity of the product in terms of how long it’s usable,” says Op de Beeck. “It’s the trends as well, it’s wanting the latest thing, and I think that component is a lot more difficult to challenge because ultimately it’s a cultural one.”

Fashion is by its nature ephemeral. While this may once have been about the style of the season, time frames have shrunk. Influencers can start a new trend in an instant, and just as quickly clothing that was considered desirable one day is obsolete the next. Tackling that aspect of fast fashion means changing consumers mindsets and understanding what reasons, other than trend, may want us to keep what we wear for longer. 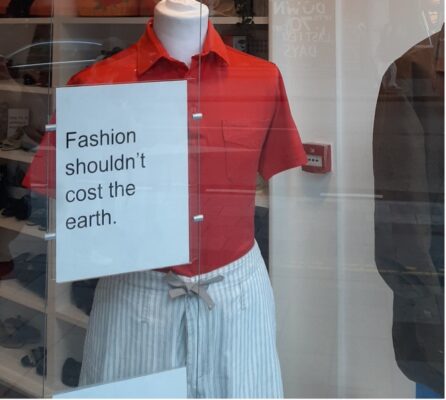 It is associated with what Tim Cooper, Professor of Sustainable Design and Consumption at Nottingham Trent University, describes as emotional durability. “Clothing lifetimes reflect cultural change,” he says. “It would be pointless to make products last longer if consumers don’t want them that long.” To that extent, he argues, consumers share some of the responsibility for planned obsolescence, products that are deliberately made to have only a limited lifespan. There are signs though that consumers are warming to ways in which clothing can be kept in use for longer, particularly when it comes to resale. “

There has been a shift, so we are seeing second-hand goods, pre-owned, vintage or whatever, having a credibility that 15, 20 years ago they didn’t have,” says Professor Cooper “and that shows the possibility of cultural change, and the various reasons people gave in the past for not wanting to wear second-hand clothes seem to have been overcome in the younger generation.”

Online resale platforms are helping to drive that change. In part it is a new narrative. Second-hand sounds like second best. But call it vintage, or pre-loved and the story becomes one of desirability. Re-use itself becomes fashionable. The shopping experience is changing too. The chaotic jumble sale look of many charity shops is being replaced by a layout more akin to a boutique. And the motivations are evolving too. Whereas previously purchases might have been driven by thrift or an alignment with the values of the seller, the environmental benefits of re-use are being brought to the fore.

Even so, re-use faces a deep-seated challenge: cost. However well-intentioned consumers may be, so long as new clothes remain as cheap as they are concerns about climate or other environmental and social impacts may struggle, even among younger generations. As is the case for many other consumer goods, low prices drive behaviour, and they also lower expectations. “One of the problems is consumers don’t expect things to last as long as they could do, or ought to do,” says Professor Cooper. “People will say, well it doesn’t cost so much to buy a new one, therefore why would I expect it to last a long time?” 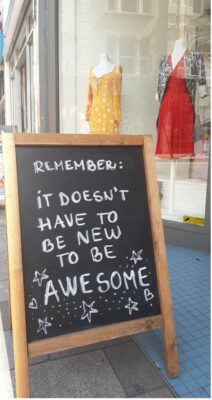 Cost may also limit the potential of other ownership models. Retailers that have in the past been known for renting big ticket garments, like formal wear, are now re-imagining the concept as clothing subscriptions. Payment gives access to a certain number of items each month which are then returned. While this may make sense for more expensive clothing, it’s a less convincing strategy at the cheap end of the market. And while subscriptions may provide a new way of delivering the buzz of novelty to consumers, the environmental benefits aren’t always clear, says Julie Hill: “What matters underneath that is how the business model is operating in terms of the actual clothing and the returns, transport, packaging – can they show the whole life cycle has less impact than just going to the shop and buying something?”

The argument that clothing is too cheap, and that higher prices would solve some of the challenges, is easily made by those who can afford more or see environmental factors as the priority. But any solutions that resonate with only certain demographics will fail. Furthermore, while durability, re-use and new ownership models will need to play a part, there are significant cultural and psychological barriers to overcome. And while new thinking on fashion and clothing dwells largely on the negatives, this needs to be balanced against the positives of an industry that is worth $1.3 trillion globally and employs 300 million people in its value chain. Indeed, this takes us back to The Man in the White Suit, where Sydney Stratton finds himself pursued not just by the textile manufacturers, but by the unions who see how less clothing will mean fewer jobs – a warning that innovation needs to see solutions in a broad social context and beware of unintended consequences.

If you want to come join the challenge and start designing some innovative solutions to take on fast fashion, then have a look at our upcoming Design Sprint Camp. Register interest below to speak to one of the team about the course:

We use cookies (preferably to eat)… Your privacy is important to us. It is our policy to respect your privacy with any information we may collect via our website. If you continue to use this site we will assume that you are happy with it. Happy exploring!
Cookie SettingsAccept All
Manage consent

This website uses cookies to improve your experience while you navigate through the website. Out of these, the cookies that are categorized as necessary are stored on your browser as they are essential for the working of basic functionalities of the website. We also use third-party cookies that help us analyze and understand how you use this website. These cookies will be stored in your browser only with your consent. You also have the option to opt-out of these cookies. But opting out of some of these cookies may affect your browsing experience.
Necessary Always Enabled
Necessary cookies are absolutely essential for the website to function properly. These cookies ensure basic functionalities and security features of the website, anonymously.
Functional
Functional cookies help to perform certain functionalities like sharing the content of the website on social media platforms, collect feedbacks, and other third-party features.
Performance
Performance cookies are used to understand and analyze the key performance indexes of the website which helps in delivering a better user experience for the visitors.
Analytics
Analytical cookies are used to understand how visitors interact with the website. These cookies help provide information on metrics the number of visitors, bounce rate, traffic source, etc.
Advertisement
Advertisement cookies are used to provide visitors with relevant ads and marketing campaigns. These cookies track visitors across websites and collect information to provide customized ads.
Others
Other uncategorized cookies are those that are being analyzed and have not been classified into a category as yet.
SAVE & ACCEPT